Vanda is an extraordinary but well-liked orchid. It is native to the Himalayas, India, and southern China. In those regions, Vanda does not grow in the soil. Rather, it solidly secures its aerial roots to the tree bark and hitches a ride to the light on the growing tree tops. Its sponge-like aerial roots enables it to easily extract water and nutrients from dew and rain, which ensures its survival. 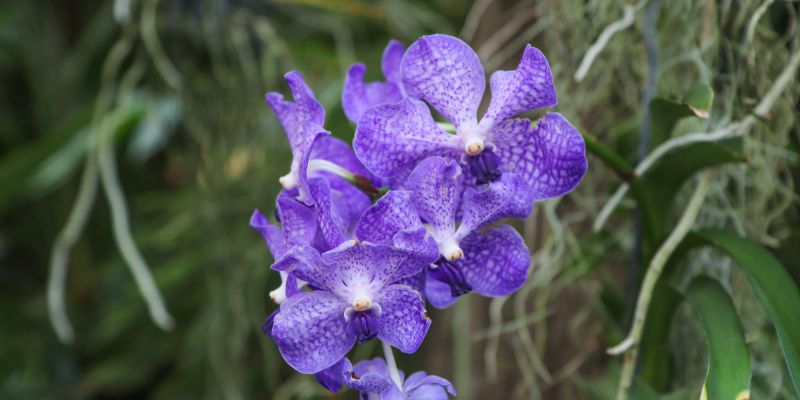 Vanda can easily be kept in the living room, but does require special care. The solution for this requirement is a special vase that protects the aerial roots. Twice weekly, add lukewarm water to the vase and make sure that the aerial roots are submerged up to the black receptacle. After half an hour, remove the water from the vase and place the orchid in a warm and bright location. The plant will have stored enough water in its roots for a few days.

Vanda is more expensive than your average orchid. This is because it takes longer to grow. The plants for sale in our shop are already seven to eight years old.

Temperature: Vanda loves a warm spot. In the summer, Vanda can be suspended outside in a spot exposed to morning sunlight.

Water (in the vase): Fill the vase with water or rainwater once or twice per week (depending on the indoor humidity and temperature). Make sure that the aerial roots are completely submerged up to the receptacle. Do not spill any water on the leaves. If you do, remove the water from the leaves. Empty the vase after 20 minutes.

Water (without vase): Mist Vanda’s roots between one to three times per day in the winter. If the orchid is kept in a dry environment, submerge its aerial roots twice per week in a bucket of water for half an hour (see also the section: care in glass). When Vanda’s roots turn grey, then they are dried out and require water. Green roots indicate that the roots are saturated with water.

Fertiliser: Twice per month, feed vanda our special orchid fertiliser ‘Groei en bloei’. Dosage: one level teaspoon per one litre of water. In February, May, and September, sprinkle one level teaspoon of ‘Grondverbeteraar’ (soil improver) once over the potting mix. The orchid does not require fertiliser from November up to and including January. Both products are sold in our shop.

After flowering: Please do cut off the stem at the bottom if it is past flowering. The orchid will generate another stem. This will take approximately eight to twelve months.

Back to care tips for orchids
Due to the policy of the government The Orchideeën Hoeve temporarily closed Read more
We are happy to help you
Facebook Messenger
+31 (0)527 202875
info@orchideeenhoeve.nl
Frequently Asked Questions
Discover the park
Plan your visit
Park schedule
Organisation