Phalaenopsis is also referred to as the Cooktown Orchid. It is native to the tropical rainforests of Asia, New Guinea, and Australia. There are good reasons for this orchid being the favourite adornment for Dutch living rooms. Phalaenopsis is namely typified by being easy to care for, a long flowering period (sometimes more than three consecutive months), and being one of the few species of orchids that produces more than one flower stem per year. 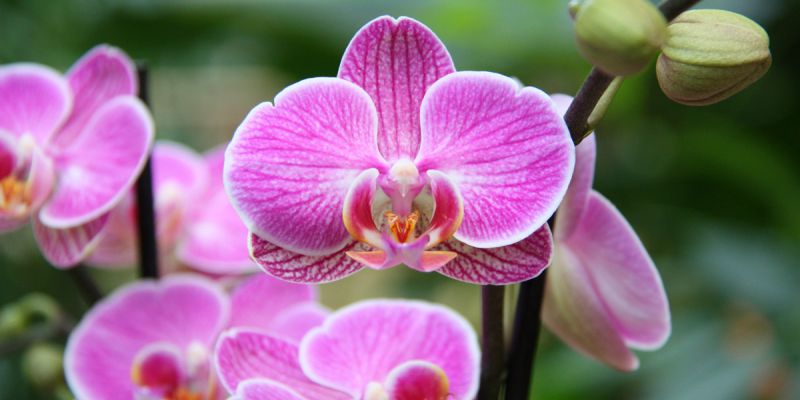 Temperature: Phalaenopsis loves living room temperatures. The minimum temperature for this orchid is 15 degrees Celsius. Temperatures that are too low or an excess of water can cause the orchid’s buds to fall off and the roots to deteriorate.

Water: This orchid should not be overwatered. It is sufficient to water it once every seven to nine days. Water phalaenopsis only once its soil is almost dry. This can easily be determined by means of a skewer. Stick the skewer in the soil and retrieve it occasionally. Phalaenopsis requires water if the skewer is dry.

Dosage: one level teaspoon per one litre of water. In February, May, and September, sprinkle one level teaspoon of ‘Grondverbeteraar’ (soil improver) once over the potting mix. The orchid does not require fertiliser from November up to and including January. Both products are sold in our shop.

Soil: It is important to replant Phalaenopsis once every three to four years in orchid potting mix. For this orchid, the Orchideeën Hoeve has put together a well-aerated mix of bark, coco, and peat. This mix is available at our shop.

After flowering: Cut the stem of the flower at one centimetre above the third node when it is still carrying two or three flowers. The stem will grow again and produce new flowers after four to six months.

Tip for repotting: Phalaenopsis can be repotted in a larger pot if the orchid’s roots are healthy. However, if the roots are soft and/or decayed, it is recommended to remove those parts and to repot the orchid in the same pot. Tearing/dividing is also an option once phalaenopsis has grown beyond the edge of the pot. Divide a single plant into two plants, at the most. Next, place these plants in a pot of the same size.