Dendrobium nobile differs from other members of the orchid family by the cluster of flowers - called raceme - that appears at its leaf axils. Nobile has a long lifespan of at least eight weeks due to its particular way of growing. Dendrobium nobile is native to South East Asia, the Himalayas, Malaysia, southern China, and Japan. This orchid tolerates much light, but no direct sunlight. 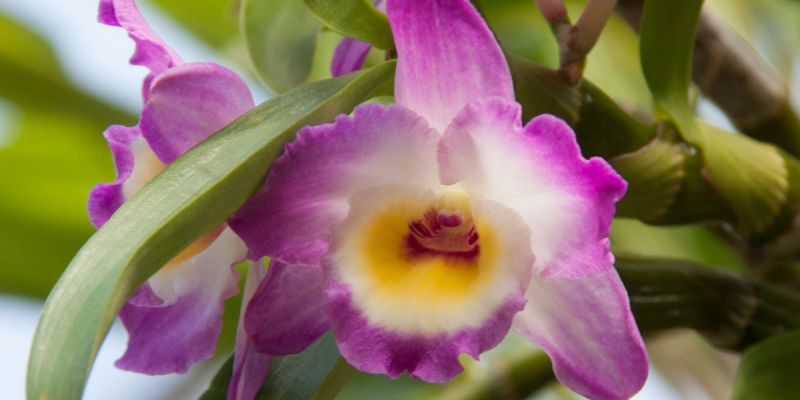 Temperature: Dendrobium nobile loves a cool and well-aerated setting with a temperature between 12 and 18 degrees Celsius.

Water: This orchid should not be overwatered. It is sufficient to water it once every seven to nine days. Water dendrobium nobile only once its soil is almost dry. This can easily be determined by means of a skewer. Stick the skewer in the soil and retrieve it occasionally. Dendrobium nobile requires water if the skewer is dry.

Fertiliser: Twice per month, feed dendrobium nobile our special orchid fertiliser ‘Groei en bloei’. Dosage: one level teaspoon per one litre of water. In February, May, and September, sprinkle one level teaspoon of ‘Grondverbeteraar’ (soil improver) once over the potting mix. The orchid does not require fertiliser from November up to and including January. Both products are sold in our shop.

Soil: It is important to replant dendrobium nobile once every three to four years in orchid potting mix. For this orchid, the Orchideeën Hoeve has put together a well-aerated mix of bark, coco, and peat. This mix is available at our shop.

After flowering: Once Dendrobium nobile has stopped flowering, the flowers will automatically fall of the stem. The orchid will generate another stem from a new shoot. This will take approximately eight to twelve months

Tip for repotting: Dendrobium nobile can be repotted in a larger pot if the orchid’s roots are healthy. However, if the roots are soft and/or decayed, it is recommended to remove those parts and to repot the orchid in the same pot. Tearing/dividing is also an option once dendrobium nobile has grown beyond the edge of the pot. Divide a single plant into two plants, at the most. Next, place these plants in a pot of the same size.

Back to care tips for orchids
The Orchideeën Hoeve is open again Reserve your visit online Read more
We are happy to help you
Facebook Messenger
+31 (0)527 202875
info@orchideeenhoeve.nl
Frequently Asked Questions
Discover the park
Plan your visit
Park schedule
Organisation